Edward Dean is Director of Music and Monastic Organist here at Worth Abbey, and is a graduate of both the Royal College of Music and the Eastman School of Music (Rochester NY, USA). His responsibilities include playing for Lauds, Conventual Mass and Vespers on a daily basis, as well as directing the Abbey Choir. 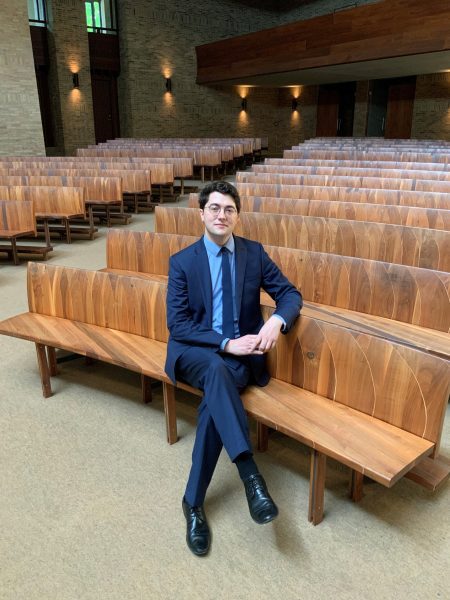 During his time studying at the Eastman School of Music, Edward was Director of Music at The Episcopal Church of St Luke and St Simon Cyrene in Rochester NY. At Eastman, Edward earned his Master of Music degree studying under Nathan Laube and was supported very generously during his time there by the Ann Anway scholarship and also the Charles R. Nicholls Memorial Scholarship. In July 2013 he graduated from the Royal College of Music in London with First Class Honours, gaining the Harold Darke prize for organ performance at the same time. At the Royal College he studied interpretation and improvisation with Sophie-Véronique Cauchefer Choplin (Saint-Sulpice), with David Graham (Church of the Immaculate Conception, Farm Street), and harpsichord with Terence Charlston. In between his studies in London and the USA, he studied privately with Andrew Dewar at the American Cathedral in Paris.

Edward has also held positions at the American Cathedral of the Holy Trinity in Paris, St Bride’s Church Fleet Street, and the Anglican Church in Oslo. He was also awarded the first ever Organ Scholarship at Lancing College, Sussex – a school which counts Peter Pears and Evelyn Waugh among its alumni.

As a composer, Edward’s compositions have been performed at many prestigious venues and festivals, including the East Texas Pipe Organ Festival and the Cathedral of St John the Divine, New York City. He is also in high demand as a harmonium player, and has restored harmoniums and acted as a consultant for the BBC.

The distinguished musician D’Arcy Trinkwon is one of the outstanding organists of his generation. Renowned for his artistic mastery and virtuoso fervour in the service of his art, he commands a vast repertoire – one of the most extensive of any artist before the public – which includes all the established masterpieces of all periods.

He has given more than 1000 recitals performing in international festivals and concerts series in concert halls, cathedrals and churches around the world, his engagements include recording, broadcasts, masterclasses, teaching and concerto performances – recently with the Manchester Camerata, the Royal Northern Sinfonia and the Hove Symphony orchestras. 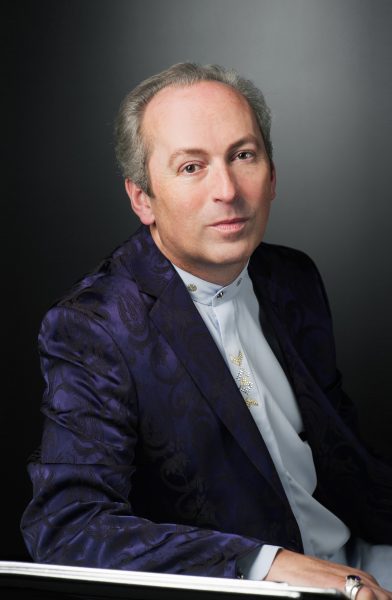 He realised his musical vocation whilst Head Chorister at Canterbury Cathedral under Allan Wicks. After teenage studies in London with H. A. and Jennifer Bate, he studied organ and piano at the Royal Northern College of Music, Manchester. He completed his studies with Jean Guillou and Odile Pierre in Paris.

Alongside his concert career he is the Organist of Worth Abbey and the University of Sussex.

His YouTube channel Virtuoso Organ Music was begun as a creative retrospective exploration of his archive concert recordings during the pandemic: it now features over 200 archive listings offering an unparalleled range of over four centuries of repertoire and some of the world’s great organs. There are also numerous uploads of his performances by other promoters.

“So much infectious joy radiates from his performance that purists could suffer severe pangs of guilt.” ORGANISTS’ REVIEW

“D’Arcy Trinkwon is a master of phrasing and the sensitivity of his artistry gives new life to the great Romantic works…Apart from his great awareness of nuances, it is this gifted musician’s mastery of colour that allows him to further illuminate unimagined perspectives in often complex works… Trinkwon earned enthusiastic applause for his technically immaculate playing and his great virtuosity. His splendid, but nevertheless subtle virtuosity combined with considerable artistic integrity to demonstrate that he is one of the really great artists of his genre.” MÜNCHENER MERKUR